Mulata Cartagenera Tells A Story Of Afro-Latinas in Colombia

In Art Collecting
By Ebonique Boyd 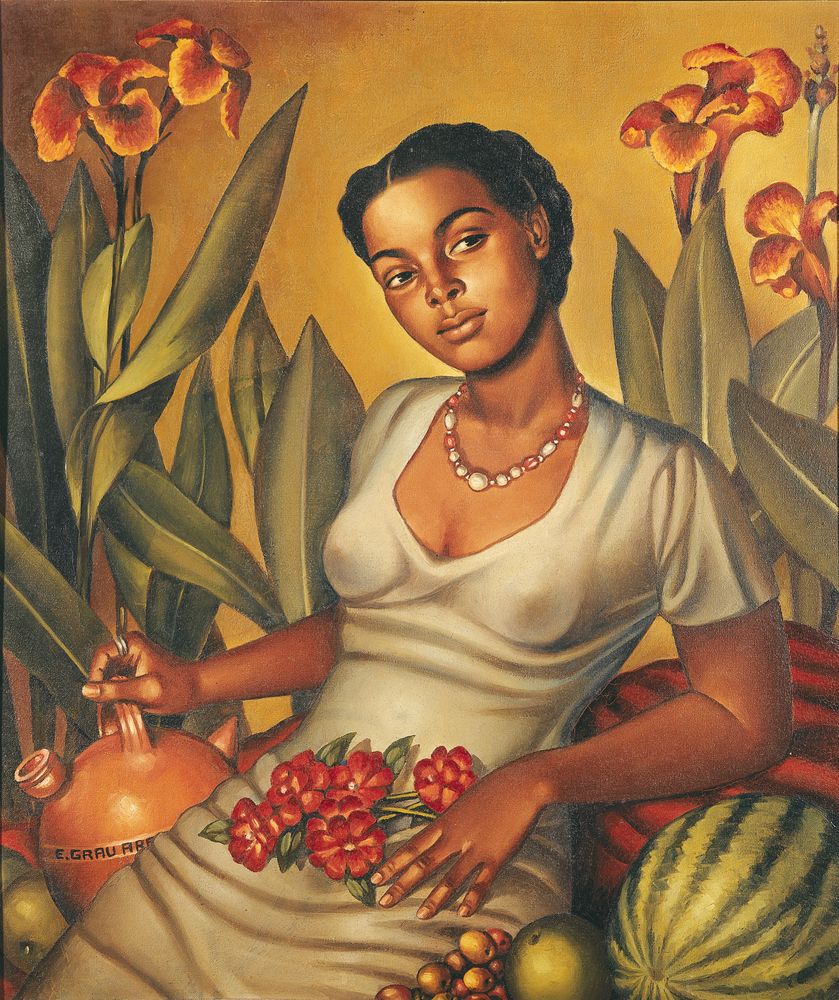 Mulata Cartagenera by Enrique Grau is one of my favorite pieces. I just love looking at the piece, because it really uncovers the history of Afro-Latinas.

Today, the word mulata is a derogatory term but was frequently used in the past as a way to classify a mixed-race woman of both African and European ancestry. The mixed-race woman is holding a Spanish bojito in one hand and her elbow is resting upon a watermelon. The painter may be hinting upon her background with that placement, as the watermelon is a fruit derived from Africa and the Spanish bojito is a traditional water jug of Spain. It almost seems as though she is leaning upon her African origins, but reaching to grasp her Spanish background as well.

On her lap appears to be fire bush flowers and behind her seems to be Phragmipedium besseae orchids. I viewed several flowers native to Colombia and it seemed like those two types of flowers appeared most similar to the painting. If you are a flower buff, please tag me on Twitter to confirm this (@EboniqueBoyd).

If it is a fire bush in her lap, I can only dare to imagine the implications of that. Currently, the area of Cartegena, Colombia is a known area of sex trafficking and prostitution. It's likely that the area has had a long history of these type of activities.

In 1934, however, six years before this painting, Colombian government officials created the Prophylactic Institute to stop the spread of STDs. The government said that they decreased the amount of "syphilitics" from 62% in 1934 to 21.84% in 1939, according to Diana Obregón at the National University of Colombia.

Before instituting these new policies, STDs were seen as violating a moral order, but the new policies allowed more people to get treatment and prevent the spread of the disease. So although many STDs were more under control in Colombia at this time, there were likely still individuals who may have had the disease.

These orchids, if they are the Phragmipedeum bessae, weren't discovered by western scholars until 1981. However, it is native to Colombia and could have been seen by Grau, if he traveled in a rainforest next to a mountain stream. The rareness of the orchids to not just Colombia, but also to the rest of the world, could be seen as how we are supposed to view the woman. Despite the fire bush and the possible struggle between identities, she is like a rare orchid that can only be viewed after a trek up a mountain.

I still enjoy this piece and can't wait until I can see the original in Colombia one day soon.

The Art Patron: Art under Socialism versus Capitalism By Andromeda Maximoff

Brown Furniture: Will It Make A Comeback? By Ebonique Boyd